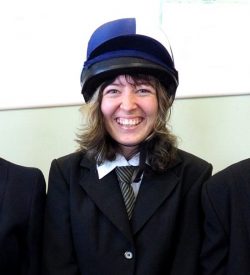 Kirsty’s charity skydive postponed by the pandemic is back on track!

A year after her original jump was postponed due to the pandemic, the date is now reset for rider Kirsty’s charity skydive in aid of Muirfield Riding Therapy. Kirsty Henderson from North Berwick, is taking on the high rise challenge on 6th June. Kirsty has been riding with us since she was 3 years old.  Now age 28, Kirsty is taking on the sponsored skydive as her way of giving back to the charity which she says has changed her life.

Please donate to Kirsty via her fundraising page.  Kirsty is very generously paying for the costs of the Skydive herself so that 100% of donations come to Muirfield Riding Therapy.

When Kirsty was very young she struggled with everything and life was a real challenge. She was diagnosed with Developmental Dyspraxia and her development was very delayed. When she did walk she just fell down all the time and life was all about bumps and bashes as she came into contact with everything around her. She was a brave and resilient little girl who just kept trying but it was hard to watch and we just didn’t know how her life would be. At times it just felt so hard.

Then, one day our lovely physiotherapist called Lynn told us about Muirfield Riding Therapy and suggested that it might help Kirsty.  Kirsty was three by now and we decided to give it a go. It felt like the first thing that offered us some hope.

At that time Muirfield Riding Therapy was a small organisation which ran out of a tack room and outside arena, with just a few ponies. The volunteers were just fabulous, so kind and nothing was too much trouble. There was so much positive energy around a lot of it generated by [Muirfield Riding Therapy founder] Gill Morrison and [former longstanding Chair] Susan Law. Kirsty just loved it and that was the beginning of her love of horses and riding.

We only rode in the summer in those days and she looked forward to Friday afternoons where she could feel happy and confident in the trust she had with her pony. Not only was she learning about riding but she was exercising her muscles and learning to be more coordinated. The volunteers also helped with her language development and in increasing her self-esteem.

This became an important part of our lives. There was the chance to meet other parents and a half hour break for us in the day, also tea and cake!  There were Christmas parties in the tack room often attended by a naughty pony and Santa, and summer fetes at the Mallard Hotel in Gullane.

Kirsty gradually made progress and life progressed so much the better for her riding. She was later diagnosed with a Learning Disability but that was just our Kirsty and she has managed that as everything else in her life with a positive attitude and a smile.

Now age 28 years old and living independently in her own wee flat close to her family home she continues to look forward to the blocks of riding with Muirfield Riding Therapy. Much has changed in those years both for Kirsty and for the charity.  There was the building of the indoor school and the visit from HRH Princess Anne, who Kirsty had the pleasure of meeting, and the growth and expansion of Muirfield Riding Therapy as it became a more professional organisation able to offer therapy to so many more people.

Although there may be less intimacy of the smaller organisation, the commitment of the volunteers remains the same as does the difference they make to the lives of those who come to ride.

If it hadn’t been for Muirfield Riding Therapy I think Kirsty’s life may not have been so easy and she doesn’t think she would be the person she is today. A confident young woman who still may trip and fall and may not always understand a complicated question but not too frightened to ask and just dusts herself off.

She gives back what she was given and has been a volunteer at the Daycentre in North Berwick for the last eight years and in Oxfam for the last five years. She greets people with great warmth and is well loved by all.  Kirsty has a brave and adventurous spirit. She has taken part in the Tall Ships with a week’s voyage where she climbed to the top of the mast! She has also abseiled off the Forth Rail Bridge to raise funds for Chest Heart and Stroke.

She has always wanted to do a skydive and decided she wants to raise money for Muirfield Riding Therapy to say thank you for all they have done for her. She knows is expensive to keep it all running and wants to help others get the support she gets. She is paying for the skydive herself  and she has set up a JustGiving page and has a target of £650. We hope people will give generously for this amazing charity that works with so many people in East Lothian and beyond.

Everyone at Muirfield Riding Therapy is extremely proud of Kirsty!